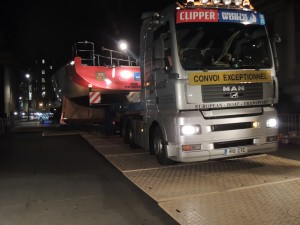 Heralding the countdown to the start of the unique Clipper Round the World Yacht Race, the iconic figure of Nelson watched over proceedings as the spectacular GREAT Britain yacht, balanced on a platform of Dura-Base mats, was launched, appropriately in front of The National Gallery in London’s Trafalgar Square.

Race organisers, Clipper Ventures, contacted Terrafirma Roadways to lay a protective track across the north terrace of Trafalgar Square, to enable the huge transporter carrying the yacht to travel over it.

The yacht was left on display to the public for a few days prior to the start of the race on Sunday September 1 from London’s St Katharine Docks.

“I was delighted with the Terrafirma team.  The install and de-install happened very smoothly, in-spite of difficulties created by outside forces which delayed the vessel’s arrival on site.  The guys conducted themselves in an extremely professional and accommodating manner” said Race Office Manager, Rob Carter.

Due to the size of the transporter and the difficulty of manoeuvring it in the centre of London, both the installation and retrieval had to happen over-night.  “The guys are very used to working on difficult sites, with tricky access, so this didn’t prove too problematic for them.  However, it was very exciting to be part of an event that is now so historic and prestigious”, said Terrafirma MD Hugh Robertson. 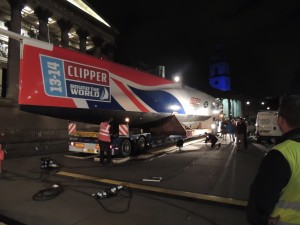 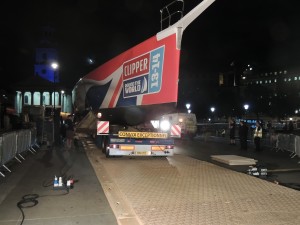 The biennual race, started 17 years ago,  was thebrainchild of Sir Robin Knox-Johnston, the first person to sail solo, non-stop, around the world in 1968-9.  His aim was to give everyone, regardless of sailing experience, the opportunity to discover the exhilaration of ocean racing.