When The Cathedral Works Organisation won the contract to do important maintenance work to the moat at Hampton Court Palace, Andrew McGregor-Bonner, their Senior Contracts Manager, called in Terrafirma Roadways, having seen what the Dura-Base system was capable of at an Open Day hosted by the company.

The welded construction of the mats, with their hollow honeycomb centre means that they float unaided on water. Once they have been interlocked together with their overlap system, they form a strong and stable floating pontoon. Senior Site Supervisor, Pawel Filipiak, constructed the pontoon around the edge of the moat which allowed safe access for the specialist stonemasons and blacksmiths that Cathedral Works had commissioned to carry out the required maintenance on the walls and railings of the moat. 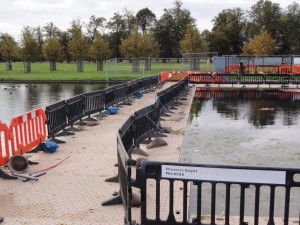 The pontoon was in place for 7 months and when the work was completed, there was no sign that any workforce had been at the site.

“We were delighted to be asked to work with such a reputable organisation as the CWO. They carry out vital work to maintain historic buildings and structures, where, of course, damage limitation is vital. We hope to work with them again in the future”, said Hugh Robertson, Terrafirma MD. 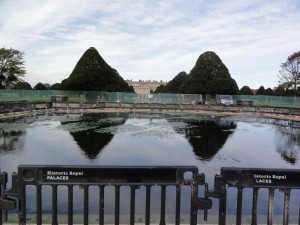